An American classic: The resort in Palm Beach with its two towers is nearly an icon of tourism in the United States. The first wealthy hotel guests began traveling to Florida in 1896—and paid four dollars per night. The estate burned down twice in its history, and in 1926 it was rebuilt in its current incarnation. 73 artisans were brought over from Italy to work on the magnificent ceiling paintings. The two championship courses are available exclusively to hotel guests. The Ocean Course was constructed at the same time as the first hotel and is the oldest 18-hole course in Florida. The Breakers Course, on the other hand, was created in 1968 and was completely reconstructed by Rees Jones in 2004. The Beach Club not only features a private beach, but also five swimming pools, four whirlpool spas, and nine restaurants—living the good life on an ultra-grand scale. 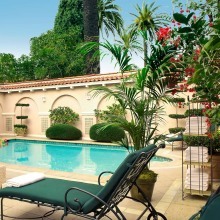