Bliss guest house invites travellers to live like a local on the island of Dhigurah among hundreds of local Maldivian inhabitants. Walking barefoot on the town’s sandy roads, visitors find pristine beaches, friendly people and coffee shop chats around politics and the catch of the day. On Saturdays, local women gather to collect fallen palm leaves for roofs and to create handicrafts for boutiques at other resorts.

As a 100% Muslim country, the “one resort per island” concept in the Maldives arose so that residents did not have to live in tourist areas. It was not until 2010 that local islands opened up to the development of local tourism.

As part of the first wave of local guesthouse owners, Anne and Musannif combined their talents to bring a different side of the Maldives to travelers.

Anne, who manages Bliss, comes from the Netherlands where she studied International Tourism Management before leaving to work and travel all over the world. Musannif, a Malé native, is a computer scientist who worked in the US for a decade as a technology consultant. After a kismet meeting in the Maldives with Anne leading Musannif as a tour guide, the two kept in touch. In 2015, after starting a water sports center on Dhigurah, Musannif acquired a plot of land to build a guesthouse and one year later, Anne moved down from Sri Lanka to run it.

They welcomed their first employee on Valentine’s Day and have since hired a mix of local and international staff. The bottom floor restaurant, Hermit’s, is open to the public and serves some of the island’s best stone-baked pizza, seafood dishes, artisanal ice cream and gourmet coffee.

Splashed with bright colors and a host of modern amenities, Bliss provides an intimate island experience that welcomes travelers like old friends to a beautiful, foreign land. 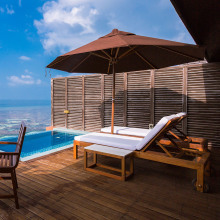 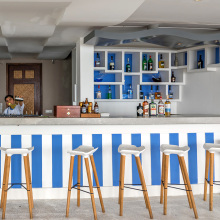 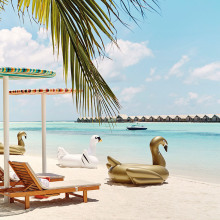